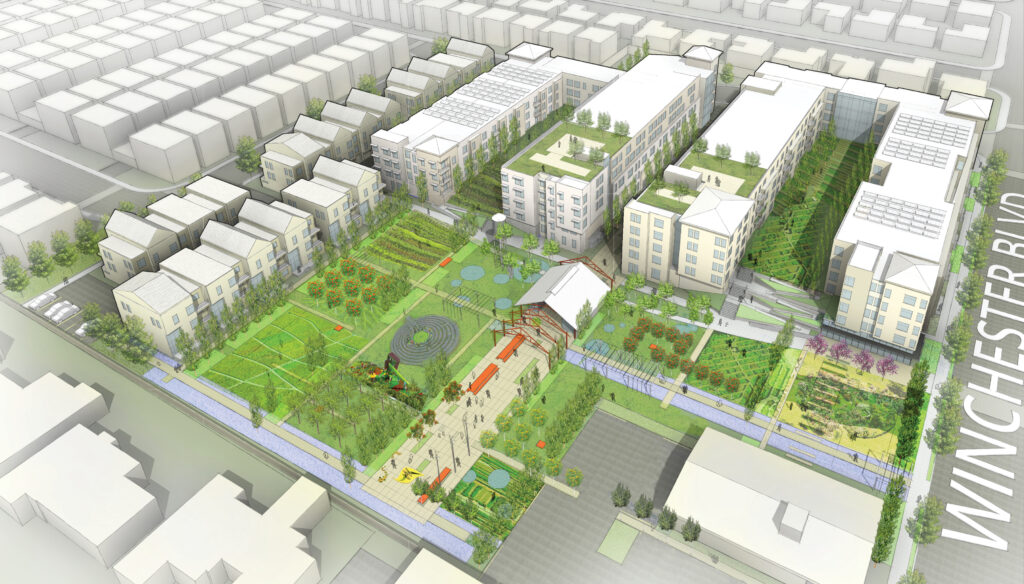 On April 30th, The Core Companies submitted a 6-acre master plan proposal to the City of Santa Clara as part of its Request for Proposals, released on February 27, 2015, for 90 North Winchester Boulevard.

The Core Companies’ proposal includes a total of 359 new residential units, including a broad mix of product types and affordability levels. The new units would include 181 below-market rate units serving seniors, veterans, and local workforce. The residential development includes rental as well as for-sale.

The master plan proposal is exciting and innovative, not just for its mix of affordability levels, but also for the 1.5 acre open space, featuring orchard trees and community-led vegetable farming. Harkening back to the Santa Clara Valley’s rich agricultural history, the open space would be designed as a local model in sustainable land use and native, edible landscaping. It would host educational and social events available to local residents, and operations would be led by the local non-profit California Native Garden Foundation and its local partners, including Master Gardeners of Santa Clara County.

The City Council will be evaluating proposals on May 13, 2015, and announcing a selected development team on June 23, 2015. After selection, the development team would begin a process of public input on its conceptual proposal, and then begin applying for formal planning review and entitlements from the City of Santa Clara.